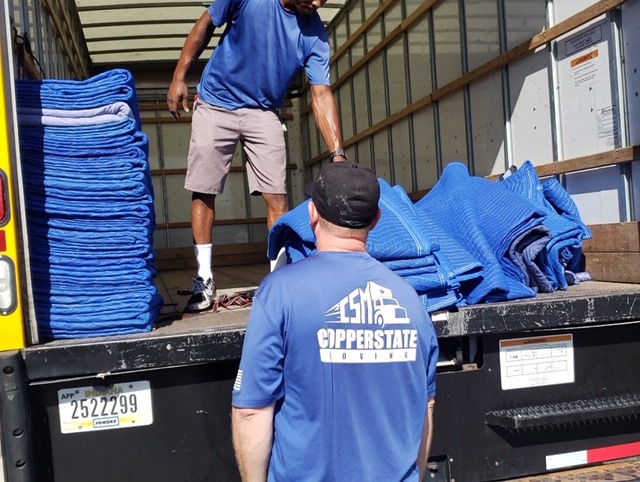 At Copperstate Moving & Storage, we pride ourselves on being available to answer any and all questions that you may have regarding our professional moving and storage services. Feel free to contact us via email or by telephone in order to gain any information you may need. We strive to attend to any and all messages left for us in a timely manner, and we thank you in advance for your time, patience, and interest.

12/16/2021, 17:50 PM
So happy I don’t have a nightmare to write about! I’ve heard a lot of horror stories about moving companies. We moved from Arizona to Florida and they only broke one picture and lost a big ladder, after calling them several times and waiting for a call back they did finally send us a check for the ladder, nice guys packing up our house and pleasant guys in Florida unpacking our stuff! I had packed up most of our boxes, they packed up the big things like our furniture and big wall hangings, dining room table and chairs and TVs. Like anything just make sure you communicate and label everything , that also makes it easier on you unpacking, and when unpacking the truck you mark off everything that you receive, very important because then you go over the list with the crew leader to make sure all your belongings arrived at your destination. If you are moving across country you may want to get in writing when they will arrive because they showed up five days later than we expected and said they had mentioned it to us But I think we would have remembered that! Had a $1,000.00 hotel bill. Get documentation in writing, communicate, pack your fragile stuff yourself other than that I would say go with this company. Overall we we’re happy!

12/02/2021, 15:44 PM
They did accommodate a short notice move and they were very friendly guys. I do recommend them over all. However, numerous expensive items that their crew packed were lost or damaged in transit. Kind of bummed out considering the over all cost was still quite expensive. Good experience over all for not having to move my own house. I would work with them again.

11/04/2021, 20:05 PM
The team was excellent! They wrapped everything and were meticulous going up the stairs not to hit our walls. They did a great job and we would recommend them to anyone!
Business Response:

Thank you so much for your kind words, Tiffany. We really appreciate you taking the time out to share your experience with us. Thank you, Copperstate Moving LLC

11/02/2021, 11:21 AM
The guys, Jesse, Gilbert, and Luis did a terrific job this morning with my move. On time, professional, helpful, polite, and fast. This is the 2nd time I've used Copperstate Moving and 5 out of 5 on both moves! Thanks for making all of this less stressful.

10/30/2021, 12:57 PM
Jesse moved my cousin and he was very fast with his crew and took excellent care of her items. Very professional and highly recommended!
Business Response:

Thank you, Jake. It was a pleasure meeting all your cousin's moving needs! We are here for you anytime. From the Copperstate Crew!

10/30/2021, 12:56 PM
Anthony, deyonte and Jesse are amazing they worked so hard and moved us in fast. Definitely recommend.
Business Response:

Thank you, Nasya. We are so glad to meet your moving needs. We appreciate you! Call us anytime. From the Copperstate Crew!

10/29/2021, 21:48 PM
The moving crew from Copperstate was professional, friendly, fast and efficient! I had them pack my U-Box, and it was like tetris - that whole thing got filled up! And Crystal, the owner, was super attentive when I had questions, and always answered promptly. Very professional, I highly recommend!
Business Response:

Thank you, Vicki. We are so glad to meet your moving needs. I have enjoyed working with you. They are definitely great at packing, just like Tetris they make it fit. We appreciate you, give us a call anytime. From the Copperstate Crew!