There are two types of people in this country: those who love pizza, and liars. For decades this movie night, birthday party, game day staple has conditioned us to perk up at the sound of a doorbell. In an age expectant on instant gratification, this savory societal pillar must evolve accordingly. The customer experience BirdEye analytics team sliced into America’s favorite food group and discovered a revolution rising faster than dough in a 900° oven: these days when it comes to pizza chains, “service” means more than doorstep delivery — customer experience is the secret ingredient.

Salute the Seasoned Veterans: Their Business Reputation is Getting Cold

The four big kinds of cheese of the pizza industry, Pizza Hut, Domino’s, Papa John’s and Little Caesars, have all been cookin’ for at least thirty years, and while they show no signs of slowing down, consumer sentiment trends over the last six months suggest steady mediocrity.

According to these rankings, Pizza Hut and Domino’s, the two largest national pizza chains, are textbook demonstrations of the exhausted phrase “quality not quantity”. What both began as simple pizzerias now offer much more than your standard pie, serving up chicken wings, pasta, and sandwiches, to name a few. Domino’s even removed the word “pizza” from its name in 2012 to more accurately describe its morphing identity. A longer menu does not seem to satiate the masses. Both companies’ customers express frustration with customer service and customer experience.

“There’s a Dominos pizza across the street and Little Caesars down the road if you want better tasting pizza and friendly workers,” customer Alyssa helpfully mentions in her 2-star review of Pizza Hut.

Meanwhile, Little Caesars’ consistent specialization in “hot-n-ready” carryout has fueled their reign as the fastest growing pizza chain in the world. In this case, the experience desired is a lack of one. Little Caesars’ customers aren’t messing around: a pizza is waiting for them before they’ve even decided they want it, and once that decision’s made the clock starts ticking. They show up, grab the goods and bolt–a mission so covert, it’s questionable it happened at all. Papa John’s shares a similar focus, so why the low ratings? Frequent complaints of bad attitude splatter customer feedback, and in the business of clean in’s and out’s, such stains are tough to wash out.

However, the godfather of no-nonsense pizza presides over only one end of the Instant Satisfaction Spectrum; BirdEye intel reveals many Americans desire more dining democracy. Recent incidents aside, Chipotle has proven how involving the customer in the creation process leads to increased consumer sentiment, so several pizza brands have begun to think outside the tortilla.

Want the best customer experience? Build it yourself.

The first stirrings of rebellion began with MOD Pizza in 2008, named for its “Made-On-Demand” feature. Similar brands emerged shortly thereafter, such as Pieology and Pie Five Pizza. In addition to their own signature menus, these pizza joints invite customers to play chef, building personalized pizzas from sauce to finish. Comparing overall consumer sentiment for old-fashioned versus new age pizza chains, it’s clear this sense of artisanal autonomy has been an undeniable hit. 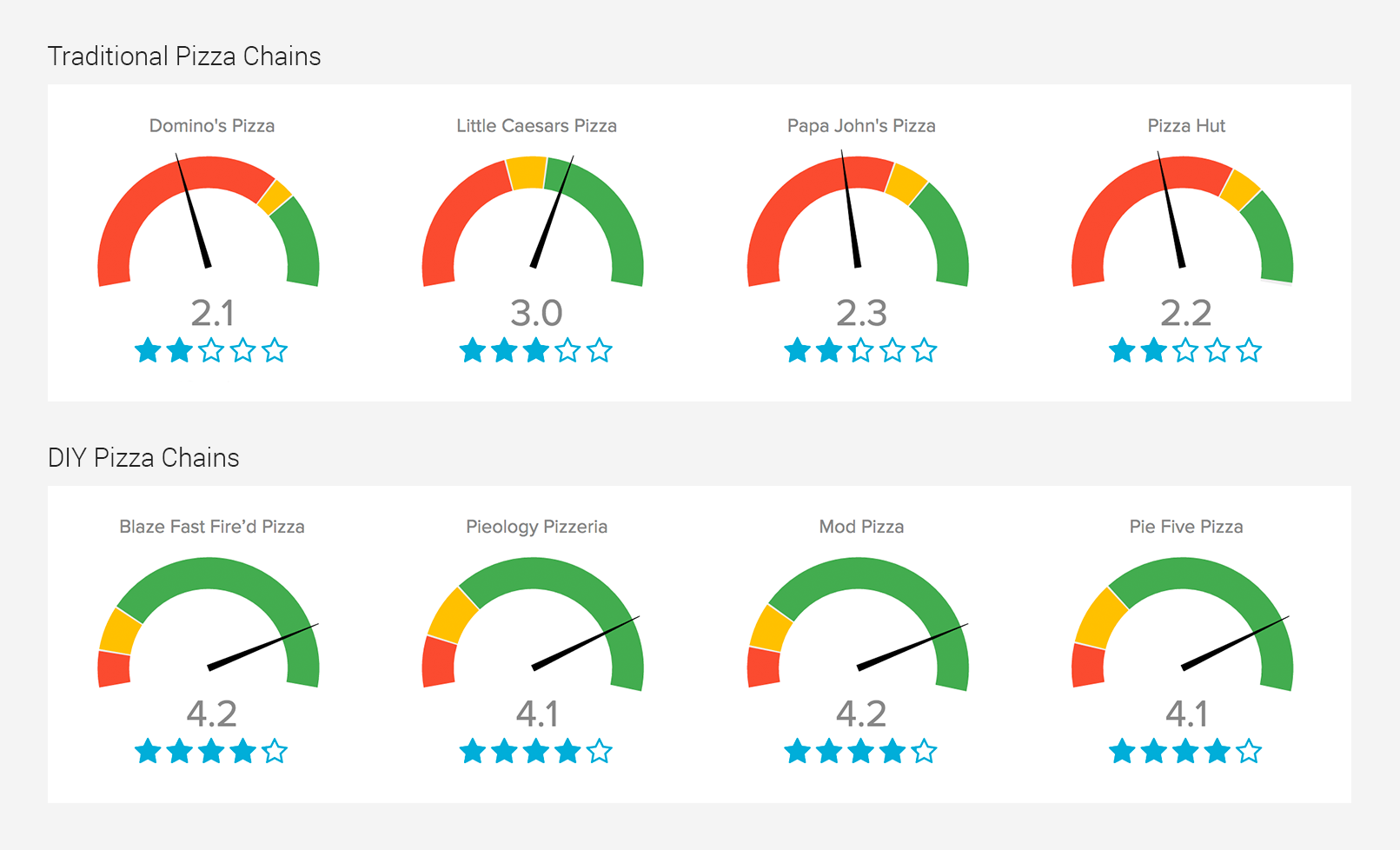 Taking the create-your-own pizza industry by storm is Blaze Pizza. Despite MOD’s 3-year headstart, Blaze has already leapt up to MOD’s level with its plethora of ingredients and impressive baking time–pizzas are “fast fire’d” in under 3 minutes. Like Lewis and Clark on jetpacks, Blaze is sweeping the nation at a pace of one new location every five days.

These companies’ made-to-order setups allow even the crustiest customers an opportunity for one-of-a-kind satisfaction.

This trend towards variety, freshness, and endless customization options is nothing new–heard of the iPhone? The ordinary has been reimagined. DIY pizza is piling game-changing disruption of a timeless tradition into an 11-inch diameter.

Bottom line: customers want their pizza fast, with no surprises and no sass. In the time you spent reading this article, you could have created and received your own steamy morsel of modernity and wiped the sauce from your chin, inwardly applauding your decision to add all seven cheese options–you could also have dashed in and out of Little Caesars for some hot-n-ready happiness. Hungry yet?

How to Grow Your Business with Online Reviews

Don't miss out on the latest from BirdEye. Get our newsletter.

Don't miss out on the latest from BirdEye. Get our newsletter.

Thanks for subscribing for the BirdEye newsletter.