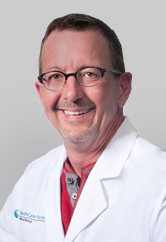 03/01/2012, 14:47 PM
Dr.McAnallen is a very caring physician. He tells you up front about your health. Some people may not want to hear that they have to loose weight and exercise but it,s the truth. He listens and spends time with you. Doesn't order test that's not needed. His nurse Judy and Vern returns my call right away like within 30 mins. The whole office staff are very friendly. I will highly recommend Dr.McAnallen.

03/14/2011, 05:14 AM
I have seen Dr. McAnallen for almost a year now. I have found him increasingly inappropriate and unprofessional in his interactions with me. As far as medicine, He is a D.O, and he has helped me stabilize my thyroid levels. We have be unsuccessful in ridding my migraines, but he has tried by ordering a few tests to rule out things. As far as bedside manner, he appears to have become attracted to me and he doesn't conceal that. Instead, he has started making inappropriate comments during my appts. and I feel increasingly uncomfortable with him. I am searching for a new Interist.