Welcome to David's Bridal Clarksville, Indiana store, serving brides and special occasion customers of Louisville, New Albany, Jeffersonville and more. David's Bridal is the ultimate one-stop shop for wedding dresses and all your formal apparel. Our exclusive assortment of bridal gowns features a broad spectrum of silhouettes, lengths and styles, empowering you to find a unique look for your special day. Our wedding dresses, bridesmaid dresses and feminine party looks are designed in the hottest fabrics (we are loving lace!), colors and silhouettes, from trumpet dresses to ball gowns to fabulous short styles. Our sizes span from petite to plus, so every woman can walk down the aisle in the 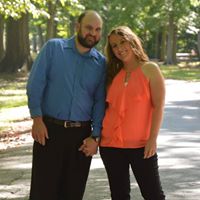 06/18/2011, 03:39 AM
I worked with Cedric here and he was amazing. I tried on many dresses and came back multiple times before making my final decision. Each time he was more than happy to meet with me and never rushed or pressured.

09/25/2010, 11:01 AM
I have had both good and bad experiences with David's Bridal. I went to one in Bloomington, Indiana and absolutely HATED it. The employee's were all so rude and although I had an appointment scheduled, I had to wait at least 30-45 minutes before I was helped. When I finally received service I was scolded by the lady because I was carrying a dress that I liked. No one had told me what to do with them once I found ones I liked. Then my maid of honor overheard them talking about me. How rude! So we decided to try the one in Clarksville and it was SO much better! They were all so polite and great! I got a lot of help and everyone was very honest about how dresses looked. Now that being said, I did have some problems with the alteration department. I had gone in for my fitting and my dress was a little big. I had my mother and my mother in law with me and they both commented on certain areas that needed taken in and I agreed. The lady marked everything with pins and took notes. There were also a couple of places that needed fixed where some beads had come loose. She gave me a date of when I could come pick it up and I was really excited. Two days before I was supposed to pick it up I get a phone call from the lady telling me that she doesn't really remember what her notes mean and that she hasn't done anything to the dress because basically she doesn't know what to do. So she asked if I could come in for another fitting so that she could remember what she was supposed to do. This would delay my dress being finished by at least another week or two. When I went in for the appointment it wasn't even the lady that I had been working with but someone entirely different! I was trying to expalin to her what was supposed to be done but she wasn't understanding and basically told me that I should just take it as is. I was so ticked off by this time that I just took the dress home. It ended up sliding down on me all night and my bridesmaids had to keep pulling it up for me but oh well. It was still a beautiful dress and beautiful wedding.

01/01/2010, 17:26 PM
David's Bridal was the biggest headache of my entire wedding planning process. They didn't have my dress in my size and said they couldn't order it. I told them I would have it altered, but declined to have it altered there because they were so much more expensive than any other alterations places I knew. I asked them to still do the bead check since I bought my dress off the rack and they said it would take a week. I came back a week later and they just shuffled me around from person to person for 15 minutes (making me late to my next appointment) before telling me that my dress was forgotten about. I had 5 different dresses being worn among my 10 bridesmaids (2 bridesmaids wearing each style) and found a few short weeks later that two of the dresses had been discontinued with no warning from David's Bridal. One bridesmaid had already purchased the dress and one hadn't...but DB wouldn't let the one who had return her dress so the two could still match even though they had failed to tell me that the dress would no longer be available after a certain date.Besides that the customer service was terrible, their computer systems were perpetually flawed, and their management is the worst I've seen of any business. The ONLY positive thing I took away from David's Bridal were the discounts I received for buying my dress there.

05/16/2009, 02:12 AM
I bought my dress from Davids Bridal, and loved it! The only thing that bothered me some was that I told the lady that was helping me pick it out that I was on a budget, and she still brought me dresses way out of my price range and kept whispering to me to just get a Davids Bridal credit card and throw my balance on there. I did not want a credit card to pay for my dress and told her so. I was asking about the price of everything, and when it came to the veil she picked out, I loved it and asked her the price. She said she didn't know what the price was, but would find out. She never did, and I was happy to find a dress in my price range, and had forgotten about about getting the price of the veil. We get up to the register to pay, the lady tells me how much I owe, and I was very suprised about the price being higher than I thought. After paying for it, I got the receipt, and the veil was 200.00!! I didn't want to spend that much on a veil, but was stuck with it because all sales are final.

11/01/2008, 06:33 AM
I think that Davids Bridal is the worst place to deal with! I got engaged back in April '08 and i went in there atleast 50 times to deal with everything to my wedding dress to the little flower girls. It seems like they went out of their way to make it a living hell for me while I was there. It is funny now, but I noticed all the times that I had went in there, if I was dressed not as great, wearing sweats or something like that they wouldn't even give me the time of day. Hey, I work nights and for me to wake up at 7am, your gonna see me in sweats! But if I went in there dressed regularly they were not as hostile. My maid of honor wanted her dress steamed before she took it home and the women working were very rude about it, but the decided to do it with the dress still on her. They burnt her arm badly because they weren't paying attention to what they were doing, and didn't even apologize. While we were waiting another bride was getting fitted and was telling us about how she had wanted to buy a dress off the rack because it was a little bit cheaper, but they said they couldn't do that, I thought it was quite funny considering that my dress that I had tried on prior to that day wasn't there anymore because the woman said it was sold. Anyways, the girl went ahead and ordered a brand new one. When it came in, she tried it on and it was DIRTY at the bottom where girls had tried it on in the store and walked around getting it dirty, clearly it was right off the rack. Davids bridal argued with this woman that it was brand new and it was supposed to look like that. They got a different size of the same dress off the rack and it didn't have that. Davids Bridal would not give her a refund or anything. If I had known we were going to deal with that much trouble, I had went somewhere else. I would NEVER recommend ANY Davids Bridal to anyone.

05/17/2008, 07:06 AM
The dress wound up being gorgeous, but the cost was rather high (for a dress that's worn once). The help was crap. Honestly, I've never seen worse customer service. But the alterations department was absolutely wonderful and made up for the crap I had to put up with from the other workers.