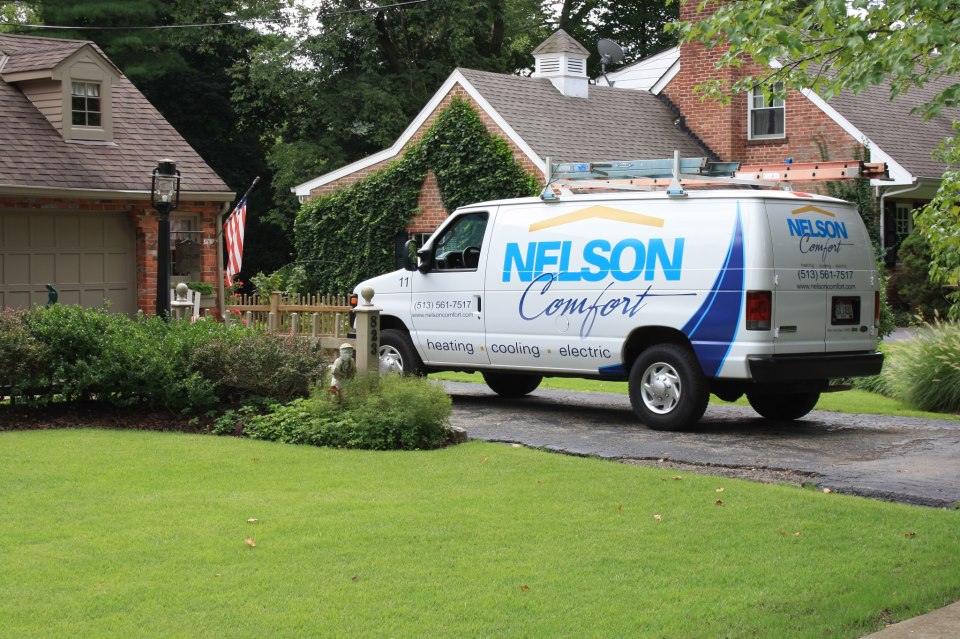 Nelson Comfort is a family-owned and operated company that has proudly served the Greater Cincinnati area since 1925! We pride ourselves on our reputation for being honest and professional while providing superb heating and air conditioning customer service. Our highly trained team of customer service representatives and service technicians are available 24 hours a day, 7 days a week, 365 days a year to help your family with all heating, air conditioning, geothermal, and electrical needs. After a year of working with Nelson Comfort, our service technicians become NATE (North American Technician Excellence) certified, which is the highest level of certification in the HVAC industry. This ens

11/28/2018, 08:02 AM
Our furnace went out during the evening a few days after Thanksgiving. I called Nelson and they put me on the schedule and had a service tech out to my house that afternoon. He got the furnace up and running after a cold morning of blankets and electric heaters. Thank you very much. I will definitely recommend their services to anyone that I know that needs heating or a/c service.

08/16/2018, 10:54 AM
No stars Nelson Comfort installed an A/C unit for us 5 years ago. This July 1, we came back from vacation to a house that was over 80 degrees. We called Nelson because we thought the warranty we had was with them. Victor was headed to our house by noon. I called a friend of mine, described the problems we were having, and he suggested it might be the capacitor. Then Victor called back, close to noon, and stated he couldn't service our unit because he's not licensed to work in KY. Now we were going to be another day without A/C. I eventually called back pretty furious that Nelson intentionally has large periods of time where they have no technicians scheduled that are licensed to work in states they have sold A/C units in. Victor was super apologetic. He thought his boss was licensed to work in KY. Not surprisingly, after talking to his boss on a Sunday, he was instructed to come on out. By this time, it's between 4 and 5. Victor finally shows up. He takes a look, and sees we are short some coolant. There's a premium for putting coolant in on a Sunday because it's inconvenient for a company to do business on that day. (As if we chose the day we were going to have trouble with the unit they sold us, or we hadn't waited hours for them to show up.) Putting the coolant in still didn't solve anything about how it was leaking. I suggested that it might've been a capacitor issue. This was dismissed outright. We were looking at paying $500 and not being anywhere near a solution. We decided at that point we had no confidence in Nelson or their customer service and asked Victor to go on his way. He then proceeded to bill us $130 for showing up. We asked what this charge was for and he said "A diagnostic." We decided not to pay. Because he hadn't diagnosed anything. We wrote my wife's number on the bill and asked them to call us. It's August 16, and we still haven't heard from them, other than an additional bill they sent us, then one yesterday with a finance charge attached. I'm going to call them today. We will see how it goes.

02/01/2018, 03:09 AM
I have used Nelson for a number of years. 4 years ago they put in a new geothermal system and standby generator at my home. They have serviced both bi-annually since then.The generator failed to operate recently, and the service received was alarming. The technician diagnosed for almost 3 hours and eventually determined that a $700 part/repair was needed and not covered under warranty. The unit would not transfer the home back to utility power. When asked if we could simply bypass the generator to run on utility power while we waited on the part, the answer was no. After 3 days without power I called another ******* supplier locally. After coming out same day to look at the generator one simple switch was pulled to restore power to the home. Further, the $700 repair part that Nelson stated was broken was actually fine. The switch that needed replaced was recalled by ******* a couple years back. Nelson never performed the warranty campaign replacement during the numerous service calls. It was also apparent that the valves had not been timed, and two major bolt were missing from the initial install on the manifold. No firmware updates had been made during those maintenance visits either causing several faults on the unit. In short, Nelson is a good HVAC company. I would never contact them for any electrical or generator based services and unfortunately after this experience I will not be using for any services.