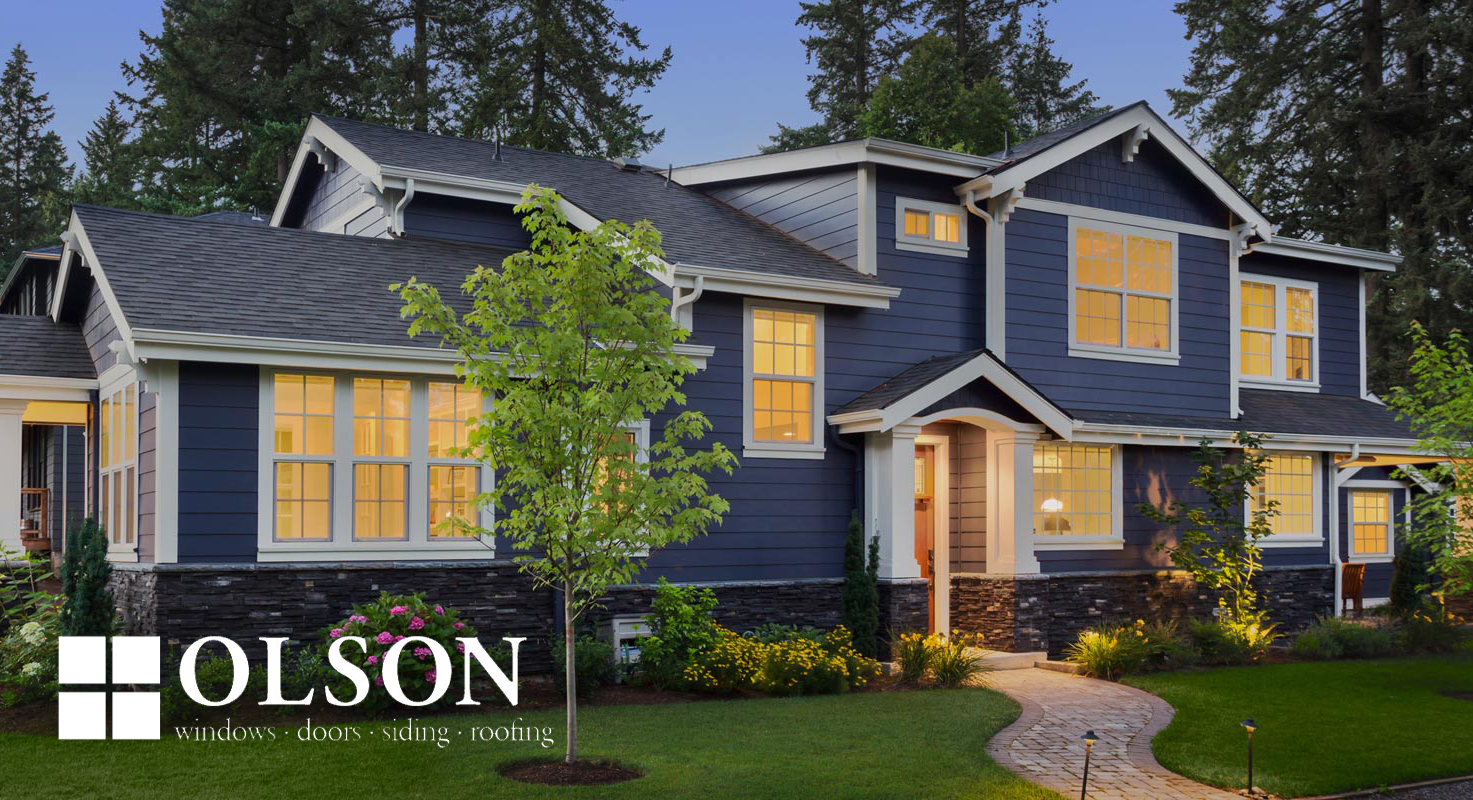 Specialties Family-owned contractor focused on window, door, siding, roof replacement and gutter/leaf protection. We deliver great homeowner experiences & top products: Pella, Andersen, Marvin, Beechworth, James Hardie, LP, Therma-Tru, GAF and Davinci. History Established in 1995. Although the company was established in 95 we got our start much earlier. Brian Olson started installing windows in 1979, and Scott Olson joined him in the early nineties. Together they installed for companies like Home Depot and worked with Pella corp. as an installation company. In the mid nineties they decided they could do it better on their own and have been doing so ever since. Meet the Business Owner Bri

12/12/2011, 11:05 AM
5 Star treatment and service. I will and have recommended Olsen since the beginning of the window and door replacement process. We replaced all of our homes windows and patio doors. We could not be happier.

11/11/2011, 13:47 PM
Wonderful company. People are polite and responsive to phone messages. Timeline for project was accurate. Workmanship was the best. I never felt like they were rushing to get the job done.I would definetly recommend and use them again.Scott Thorson oversaw the project and he was very professional and pleasant to work with. Installation of new Pella casement windows in 4 upstairs bedrooms. Aluminum cladding on the exterior of all the windows.Inside windowswooden trim stained and varnished.
Business Response:

Thank you! Great working for you! I hope your dogs enjoyed the biscuits!

11/03/2011, 16:20 PM
As mentioned above, my experience was excellent! I've had Olson Windows, Doors & Siding out before to do work and they do an excellent job. I'll be calling them in the future for sure! I had Olson Windows and Doors out to replace my front door. From the moment I called the office thru the completion of the job I was incredibly impressed! I've had Olson Windows out to replace windows and a sliding glass door in my house before, so I thought I'd give them the opportunity to impress me again with their professionalism, promptness, competitive pricing and excellent work. I'm thouroughly impressed and will be forever happy with my awesome front door and my new bathroom window! Thanks so much!

10/30/2011, 11:32 AM
Our project to replace window and sliding doors started with water leaklng through a basement ceiling from a faulty, poorly insulated sliding door on a second floor deck. We contacted two suppliers: Olson Windows, a local Barrington company (847 304-8713) and Anderson Windows. We were both very pleased with the low pressure but informative presentation from Brian Olson who made a sincere effort to understand our goals and needs. The Anderson presentation was more "high pressure" but supported by a computerized "pitch." We selected the Pella Windows by Olson. This was a very pleasant experience from beginning to end. The price was $3,000 less for what appeared to be similar doors. All the time lines and promises were kept on the projected timeline. The installers were efficient and left the rooms spotless when they were finished. We had very minimal disruption over the two days to complete the installation of three windows and two sliding doors. The project was finalized by a professional painter who matched and painted any wall or moulding damage. We were very happy with the project and final results, especially the installation. Our fears about damage to our expensive window treatments were groundless. We are now air-tight with the changes to the trim outside and our leak has disappeared. Brian was also very helpful in facilitating the process for getting approval from our Condo Association for the change. We would srongly recommend that you check with Olson before starting a window replacement project. We replaced two sliding doors, two large picture windows and one smaller one. We changed the color of the window trim around the windows inside our home.

10/15/2011, 13:59 PM
The salesman was very courteous and professional. He was patient with all my questions and was prompt in returning my calls. The installers were eager to get started, but the weather was not ideal. It rained off and on all week and the installation took a little longer because of this. However, they were very professional and worked diligently when they could. The installers did a fantastic job removing the old windows, installing the new ones, and cleaning up. They had some challenging windows to install and they took their time to be careful. The quality of the windows (Milgard Tuscany) seem to be very good. We had 26 windows replaced.The home is only 12 years old, but the original windows wereof poor quality.
Business Response:

Thank you hope you get a hole in one this year!

09/28/2011, 20:17 PM
The consultation went very well and theyanswered all of my questions, gave a good price and installed two beautiful doors. They did such a wonderful job I am thinking about windows next. We had our Doors replaced by Olson and they did a great job.
Business Response:

Thank you very much for being so kind throughout the process.

09/24/2011, 07:41 AM
Brian came out and provided estimates some time in June right after I purchased my house. I explained to Brian that this was my first house purchase and that I was going to be doing a lot of repair. He recommended that I get an account at Angies list since there were good reviews of the local companies from real customers and that for number of repairs I am doing that this would be good source of information. Of course he also pointed out that they were greatly rated as well. I compared the estimates with others and it was relatively high. I was about to go with someone else but wanted to get an explanation of why the price difference. Brian provided other options and also explained that they change not just the window but also the trim around the window to get better insulation. My wife and I went to their Barrington store to experience the windows. Due to some other rebuilds around our house, we signed the contract with them on July 1st. Because of their busy schedule and the number of windows, Brian explained that they would not be able to perform the job for 6-8 weeks and that they would call me when the windows came in. Due to anxiety, I called them toward end of August to ask about status. They said that windows were not ready. They were not able to install to start the work until 9/12. The day of the job, installers came on appointed time (little early but better than late in my book). When the job started, two interesting experience for me. First, the installers told me that they can take down the shades but they don't normally reinstall the shades. But they were willing to do it if the head office tells them to do it. **** I looked at the contract and it says that they do not reinstall the shades. For those replacing windows first time, please note this. This put me in an odd position since I am not that handy and so I had to call handy man to install the shades.*** Second,if you have many windows, they may start the work when they don't have it all of them. The installers told me that they didn't have all the windows. But they said not to worry since this is 3 day job and so perhaps the windows will come in while they are doing the work. Sure enough some of the windows came in the second day but not all. Toward the end of the week, I called the office and asked when the window will be available and they said that they will be available in a week. I asked if they can paint the trims so I can get the shades installed. She said that they rather do it on one day and so I should wait. I dropped an email to Brian and he had the painter call. The painter said that he was extremely busy but that he was willing to do the job on the weekend and so he came on 9/24. Thankfully, he painted and installed the shades. I like the windows I have but didn't like the experience. Again I put the cavet and say that this is my first house and I have never replaced windows before and perhaps it is the timing given that they are in busy season but this was not the experience I was hoping for when I signed for window replacement with Olsen. Disappointed by the lack of communication about what wasgoing on. I gave an A for punctionality since once we had the date, the people were on time. I gave a B for responsiveness because I was hoping that I would get some response about the status of my 2 windows. 19 windows and 1 door

09/23/2011, 09:09 AM
Our experience from our initialvisit to Olson's showroom through installation was excellent. Yvette took time to show us some of the products that were available. Dave (sales person)was extremely knowledgeable and helpful in working with us to select the correct products for our home. Olson's installation team of Tony and Bill did a great job. They treated our home as if it were their own. We had several windows and two patio doors replaced.

07/25/2011, 17:54 PM
They were professional and came out quickly after we called them to give us an estimate. They offer very high end windows. I would use them in the future if it would work out. I am not sure if we have large enough window openings, but I would use them. They did an estimate for installing windows. The windows that they sell are bigger than the opening that we had.