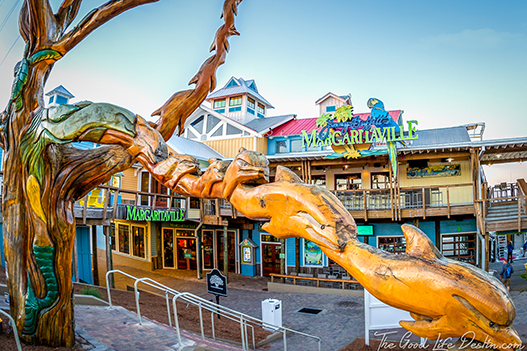 Come out to HarborWalk Village where restaurants, activities and entertainment will please each and every taste on your next Destin family vacation. With so many things to do in Destin Florida; here you can find waterfront shopping, paddle board and kayak rentals, pontoon and jet ski rentals, parasailing, glass bottom boats, world class fishing, pirate ship excursions, dolphin cruises, concerts and live music, weekly fireworks, weekly Fat Tuesday parades, live entertainment, and an array of restaurants, including Jimmy Buffets Margaritaville and Harry Ts, to satisfy all tastes.

01/09/2023, 01:29 AM
Luxury condo! We had an awesome time at Emerald Grande. Great food, room service and nice views from the balcony. All rooms are spacious. We absolutely loved the boardwalk!! I highly recommend staying here with family any day.

12/21/2022, 02:43 AM
Not quite Wyndham Great location, can walk to several restaurants. Units are due for an upgrade. We had to change rooms due to hot water dial not working in on bathroom(seems like cleaners would've known this & alerted maintenance when they cleaned) Roaches in the room-MGR.'s first response was" where we they", not " I am sorry" Apology was the last thing she said during our conversation. Carpet needs replacing in the rooms, as well as the furniture is worn.

12/12/2022, 07:53 AM
Great get-away for a weekend or a week. Great restaurants within walking distances. Spacious rooms with Gulf views. Located on a Boardwalk with adult and children's activities. Provides a private beach for all visitors. All rooms have a spacious living room and well-equipped kitchens. Master Bathroom has a large bathtub and a Walkin shower. The other bathrooms have walk-in showers.

11/28/2022, 01:42 AM
Beautiful location We had an extended stay and enjoyed the balcony overlooking the harbour. There is always something to watch. The many boats were very active and we were fortunate to have had great weather. We enjoyed the food at their bar. There was no swimming pool for adults however and that was a bit disappointing. Our last room was very nice and spacious but there was no fitted sheet on any of the beds. The bed was always a mess. No one came to clean our room even though we had an extended stay. I have to say we were not impressed with how filthy the carpet was. My feet were black after walking on the floors after a shower…..everyday. We also found the service there severely lacking. Continued problems with the tvs in multiple units. We felt like we weren’t treated as well as a guest should be. We were just one more patron who will be replaced by another. I would say that overall the property and location were desirable we don’t think we will return.

11/10/2022, 00:33 AM
A wonderful week!! The staff was super friendly. Our view from the room was breathtaking. We rode the shuttle to the beach. Had a wonderful and relaxing four hours. Nice restaurants in the harbor village. We had ice cream, seafood and coffee.

09/07/2022, 06:38 AM
Still a good time. It seems that the tower or floor had water damage because there was no carpet installed in the hallways, the closet was missing a door, the exchanging of the towels one for one and a obstructed view presented a few issues. The elevator situation is always a mess and so is parking. Overall it's still a good trip to take, when you go ask for Shannon the bellhop she's the best.

09/04/2022, 01:37 AM
Not quite up to Wyndham standards Nice, clean rooms with beautiful view of the Gulf. Unfortunately they seem to be short staffed. No towels at the pool kiosk (for 2 days). The pool and hot tub do not appear to be on the daily “to do” list. Pool deck and hot tub were pretty nasty at 0800 Thursday morning. The hot tub smelled like low tide, and there was a dead roach floating in the water. Fruit from the fruity drinks spilled the night before on the deck around the hot tub. It’s still a nice place, but not quite up to Wyndham standards.

05/02/2022, 08:58 AM
Beautiful hotel, very friendly people The hotel is beautiful and very well situated. The rooms were excellent and ours had a decent view. The pool and amenities were well maintain but they were very crowded. Walking distance to all sorts of entertainment and restaurants (McGuires across the street is a must). The staff and guests were incredibly pleasant and friendly. The king mattress in our room was incredibly comfortable!!! There is a spa with a weight room (very important to me) and it was loaded with free weights and machines and is the best hotel weight room that I have seen. The only minor draw back to the hotel itself was the lack of direct access to a beach. Having said that, they do have a private breach but that is only accessible by a shuttle boat during daylight hours. There are some very nice municipal parks with small beaches in the subdivision across the street behind McGuires. The one real significant issue I had revolved around the hotel's private beach. There is a private shuttle that runs every half an hour and the beach is absolutely gorgeous. The problem is that it is located on the outlet to the ocean and the first day we went there it was a bit choppy. There are 2 lifeguard shacks that are not in use at each end of the beach (about 400 yds apart) and a small sign warning of Rip currents at one of the shacks but they are not visible from where the boat lets you off and where the chairs and umbrellas are located. While we were enjoying the sun, there was a middle aged man wading in the ocean. Being a former lifeguard, I have the unconscious habit of noticing such things. All of a sudden he was out in the deep water and obviously struggling. He was obviously a swimmer but could make no headway towards the beach. He started calling for help, as did a woman standing on the beach who saw his difficulty. Being a retired police officer, retired Infantry officer as well as a former lifeguard I felt compelled to help, as did 3 other public spirited citizens. We headed out into the water and as soon as it got up to my shoulders I was literally ripped off my feet and dragged out into the deeper water. I instantly recognized the rip, as did the other 3 "rescuers" to and, sad to say, we had to ignore the hapless swimmer (He finally flipped over on his back and eased his was with the current to where he got back into shore) and concentrate on not drowning ourselves. I am very fit and a very strong swimmer and it was all I could do to get back into shallower water. The one guy that was close to me was going under when I finally managed to get my feet down and pull him that extra couple of feet til he could stand. It was only by the grace of God that there weren't 4 or 5 of us that didn't drown. While this was going on, my wife went and got one of the beach staff to help but they had NO rescue equipment at all. After checking with his boss, 9-11 was called and the police boat went by after we all managed to get out. I reported this to the boat crew on the trip back to the hotel and suggested that, in addition to pointing out that there should be no solids flushed down the boat toilet, they should probably mention to the patrons the possibility of serious rip currents. He assured me that he would. I reported this incident to the front desk at the hotel and the clerk assured me that the manager would call me but that never happened. We went back to the beach two days later and the same boat crew was on the shuttle but they were only concerned about solids being flushed and no mention was made of the possible current. To be fair, that day was very calm and there was not rip. The hotel should have, at a minimum, signs visible to everyone getting off the boat warning of rips, a flag indicating risk and at least some type of rescue equipment such as a ring buoy available. I suffer from PTSD from my service and the thought that I couldn't save the person that was drowning, and very narrowly escaped from drowning myself did play havoc on the rest of my vacation. I was very disappointed that the hotel management didn't contact me about this and that the boat crew didn't tell people about the possible danger!

02/06/2022, 12:50 PM
Beautiful even in winter! We made a quick getaway for a late anniversary celebration. We got a four bedroom for the view. The rooms are clean and spacious and the view is beautiful! The balcony overlooks the harbor & Harborwalk. Great location! Staff has been very friendly & helpful.