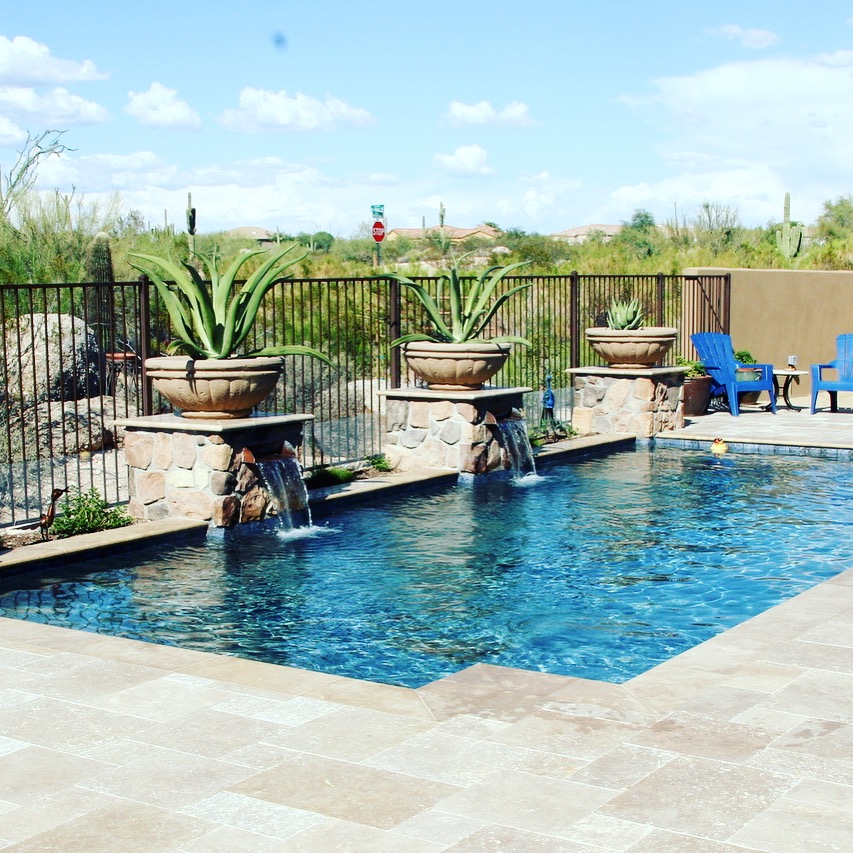 Welcome to Arizona Pool and Spa Renovations, your premiere Phoenix pool builders! We truly are your one stop pool company in Arizona. We offer new and custom pool and spa construction, Phoenix pool remodeling, Phoenix pool replastering, repair and pool equipment upgrades, as well as green to clean pool cleaning services. At Arizona Pool and Spa Renovations, we also offer pool and spa maintenance and repair, pool draining and acid washing, as well as other pool services. We offer free estimates for all projects! As a custom pool builder, we can help you discover exactly what pool and spa design you want to have created in your backyard. Our design and consultation services are available and

06/22/2015, 18:10 PM
We had Arizona Pool and Spa Renovations do our pool in May. We loved this company and the work they provided. *** was great and our pool was done quickly and turned out absolutely beautiful.
Business Response:

06/22/2015, 02:20 AM
This company keeps their crews very busy.Some days I wasn't sure if the right hand knew what the left hand was doing.The project was finished in a timely manner,but above all I am very pleased with the look of the finished product.

04/18/2015, 17:07 PM
Great company with excellent customer service. Very professional, honest and straight forward. Estimate was right on, project was completed quickly in the exact timing promised. Tim and his crew were awesome. Thank you The pool is beautiful. Lorraine M. In Phoenix,Az

04/12/2015, 16:21 PM
the end result is an absolutely beautiful remodeled pool, deck, and waterfall feature. after 5 previous proposals, we felt Tim gave us the most honest and direct responses. unlike others, he actively proposed things that we never knew existed. the interesting result is that we had the opportunity to do the job the right way with the cost being no greater than a slapstick solution. we did not hire this company due to the pricing. however,the quote was on the lower end of the quotes we received. the process did not go as smoothly as it should have. it seems that the scheduling was not coordinating with the project manager. In fact, the project manager never came to the project (which took 5 weeks to complete) after the first couple of days. He seemed to rely on reports of which subs were there and assumed that the normal process was progressing. some things didn't go in the normal progression, and that seemed to throw the management into disarray. We had 2 items that we thought were major issues. I called. it took 5 days for the process to play out to a terrific end product, but we were dealing with anxiety turned to anger that could have been avoided had the project manager stopped by to explain the solutions to our concerns. somehow, we ended up with the company owner at our house to answer questions, explain how things are put together, to tell us the fine points about operating the new pool systems and how to have a more efficient operating pool. We were disappointed that the salesman and project manager didn't walk us through the end product. He told us he would oversee the entire project, but he didn't all of the subs were terrific. each came in, did quality work, cleaned up after themselves and were friendly throughout their stay. we decided that for us, redoing the pool was like making sausage. the process was more unpleasant than it needed to be, but the end result is top-notch. we recommend this company. we would use them again.

04/07/2015, 02:08 AM
Everyone was super nice, even the workers . Great pricing and on time to complete the job. Very Happy with the work. Will be sharing their info with everyone!!

02/12/2015, 11:32 AM
Great pricing without all the upgraded pricing as with other pool companies. Great people to work with without all the pushy salesmanship. Pool looks great and kept to the schedule.

01/21/2015, 05:07 AM
By far the best price, incredibly professional and everything was completed on time. I absolutely love the resurfacing and tile work they did on our pool. I would highly recommend them!!! So happy with the results!

12/28/2014, 06:55 AM
Arizona Pool and Spa won my contract based on price and customer service and support. They explained everything to me that they would do and pointed out any other issues I had with our pool. I currently moved here from the UK not owing a swimming pool where I felt very comfort and confident with the information provided regards to the repair to our pool. One thing I was concerned about was getting over charged which I didn't with this company after having five different companies quote me for the same job. Overall excellent company which I would recommend for work man ship and customer service