Gayoso Plastic Surgery proudly offers full service cosmetic procedures in our state of the art facility. Dr. Antonio Gayoso and Dr. Frank Beninger, board certified plastic surgeons, are known for their kind and compassionate bedside manners. With surgical procedures that provide long lasting and beautiful results, both Dr. Gayoso and Dr. Beninger are well respected in the Tampa Bay Area. We are proud to have Jessica McCarry, PA-C as part of our amazing team. Jessica offers non-surgical facial and body rejuvenation with Botox, fillers and laser procedures. She is a national trainer for Allergan and one of the leading Physician Assistants in the Tampa Bay Area. Our CoolSculpting team, led b

10/15/2019, 01:01 AM
I would highly recommend Dr Gayoso and his office staff. Dr Gayoso took the time to thoroughly explain my procedure and answer all my questions. He also spent the time to listen to the results I was wanting to achieve from my surgery so that we were on the same page for the end result. Everyone on his staff is very professional and helpful. He has a great bed side manor and genuinely cares about his patients. It’s been six months since my surgery and I couldn’t be happier with the end result. Dr Gayoso is the best!

10/07/2019, 03:37 AM
Let me start by saying that I have not had my surgery yet, and I will be updating my review after the procedure. I wanted to take a moment to review Dr Gayoso and his staff for my experience thus far. I had a revision breast augmentation 3 years ago with textured silicone implants. Ater receiving a recall letter from Allergan in August, I decided it was in my best interest to have them removed. I had consultations with 3 different plastic surgeons in the area and none of them compared to my experience with Dr Gayoso and his staff. Each of the staff members were kind, compassionate, and caring in their approach. From the moment I walked in the door and was greeted with a smile, to my time at the end with Tammy (the patient coordinator) going over the scheduling...I felt so comfortable and at ease. Dr Gayoso spent an entire hour with me discussing options and answering every question I had. He even told me to come back in or call if I had any further questions that pop up. As nervous as I am about the actual surgery, I know I am in the very best hands. I cannot say enough positive things about my experience so far, and I hope to have an equally positive experience with the upcoming surgery.

10/01/2019, 08:06 AM
I could not be happier. He sculpted my body exactly how I waned. I can’t thank him enough. I also want to mention he did liposuction on my flank/above butt. He wanted my backside to look as good as my front!And wow he did that. Life changing!

10/01/2019, 05:05 AM
Post massive weight loss and one child, I was left with: Loose skin, lot all my shape, needed a tummy tuck with lipo. Dr. Gayoso did a phenomenal job. I couldn't be happier. I asked for a brand new body and he delivered. 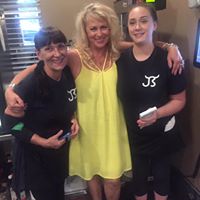 Thank you! We are always so excited when patients return to our office for additional treatment or just to say hello and let us know how they are doing!

07/15/2019, 03:07 AM
The dr. thought I was doing very well, no lipo lumps on my lower abdomen or flanks, and the breasts are starting to take shape. He did warn me not to get too attached to the volume, haha. My mind is still trying to process the huge change. It’s like – where’d they go??? It’s kind of like when you get a nice big diamond engagement ring and after a few months you think it’s shrinking or your finger is getting bigger. I know you ladies can relate, LOL. I’ve got to tell you though. The lipo sites are just downright painful, feeling bruised all the time and that weird ripping feeling under the skin when you move, not to mention the numbness, like it itches, then I go to scratch and I feel like I’m scratching dead skin. Hopefully that goes away soon. I wanted him to add more fat to my right breast as it’s always been a bit smaller. Well, now it’s bigger. Of course it’s early days still. I think it may just be that the shape is just a bit different, but they were before as well, and it doesn’t bug me. I’ll know for sure after 6 months, though.

07/15/2019, 02:43 AM
Temp was down a lot this morning, but still low-grade. PS prescribed a course of milder antibiotics just in case, and said he thought my progress was good. Will take it easy today. Took some scary-looking photos.

07/15/2019, 01:29 AM
I feel like there has been a lot of progress with my healing in a month. My breasts are still a bit bruised, but the swelling has gone down a lot. They are still kind of hard but starting to jiggle more at the top. The left side is dropping a bit more than the right, but the right seems fuller somehow, even though it is not very noticeable in the photos. My nipples are taking turns hiding for days at a time and the areolas are very pale, although they have always been pretty light. I am not taking the best photos, but in a few weeks I’ll see how my husband feels about taking better shots, as I am not good at selfies - by the time I crop them, they look all grainy. I like the shape of my breasts so far and I can tell that the scars will be absolutely razor-thin. I am so impressed that the internal sutures were able to cinch the skin edges together so tightly. My PS is amazing with stitching. I do feel very sore still, as if by the end of the day gravity takes a toll, and they feel very heavy and achy. The liposuction is still very tender so I am still wearing the compression garment all day.