E. coli with a side of guacamole?

It’s never comforting to hear your tacos may be seasoned with disease. Chipotle, the burrito chain built on serving “food with integrity”, has severely contaminated its reputation with 55 virus outbreaks in 11 states across the US in 2015. Consumer sentiment reports imply hope of recuperation exists, but deeper insight into this customer feedback suggest a rough road to recovery ahead.

Plummeting stock prices cannot be ignored, but more valuable than dollar signs could be the minds that determine them. Birdeye is a next-generation business reputation and consumer experience platform that reimagines how customer feedback is used to acquire and retain connected customers. Our analysts used the Birdeye platform, based on natural language processing with machine learning to capture and analyze online sentiment in 23 states, 50+ sites, 216 Chipotle locations and several primary competitors for 2015.

In the first half of 2015, online ratings and sentiment proved as infectious as the virus itself. The following chart shows how nationwide online ratings for the Chipotle brand were afflicted by the series of outbreaks.

In the second half of Q4, customer sentiment soared. Assuming positive customer confidence implies loyal lunch breaks to a favorite restaurant, could this consumer sentiment trend be a profit indicator for a brand like Chipotle, or were the losses in early Q4 too severe to bounce back from in time?

While overall sentiment has increased, certain locations have developed notoriety for their contamination incidents and local customers remain bitter.

Simi Valley needs a bit of specialized intensive care, ranking a dismal #206 of all 216 branches. Want the best overall Chipotle experience? Head to Mankato, the top-rated location where customers are cheesin’ hard and all injury seems to have healed.

Another crucial factor to consider is sentiment towards major competitors. Unsatisfied Chipotle customers are still hungry for a quick bite, so where are they taking their grumbling tummies instead?

A glance at the Birdeye competitive benchmarking tool suggests Chipotle is now in the clear despite an initial undignified tumble: in summer 2015, customers were about as satisfied with Chipotle as they were with Taco Bell. For a company that prides itself on serving fresh ingredients, lurking in the land of Dorito taco shells and glowing cheese is a far cry from success. Since then, however, Chipotle appears to be clambering back into favor with its target consumers, perhaps due to crisis control procedures implemented throughout the media including founder Steve Ells’ numerous public promises of improvement.

Consumer data indicates that customers have forgotten the E. coli scare; however, as in any relationship, earning forgiveness is a different story. While it seems the symptoms have subsided from Chipotle’s feverish financial plunge a few months ago, their rocky last quarter set them behind competitors and it will take specialized efforts to win back customers’ hearts. Aware of this, Chipotle will close down all branches for a nationwide team-meeting on Monday, February 8 to discuss plans to improve in 2016.

What should they focus on this year?America has specific priorities in mind for a speedy meal–according to Birdeye data, these are customer service and meat quality. Panera ranks highest for both, while Chipotle’s chicken is most frequently described as “burnt” or “raw”, and their service is almost equally reported as “great” and “terrible”.  These drastic inconsistencies are likely to leave a foul aftertaste in the mouths and minds of customers. 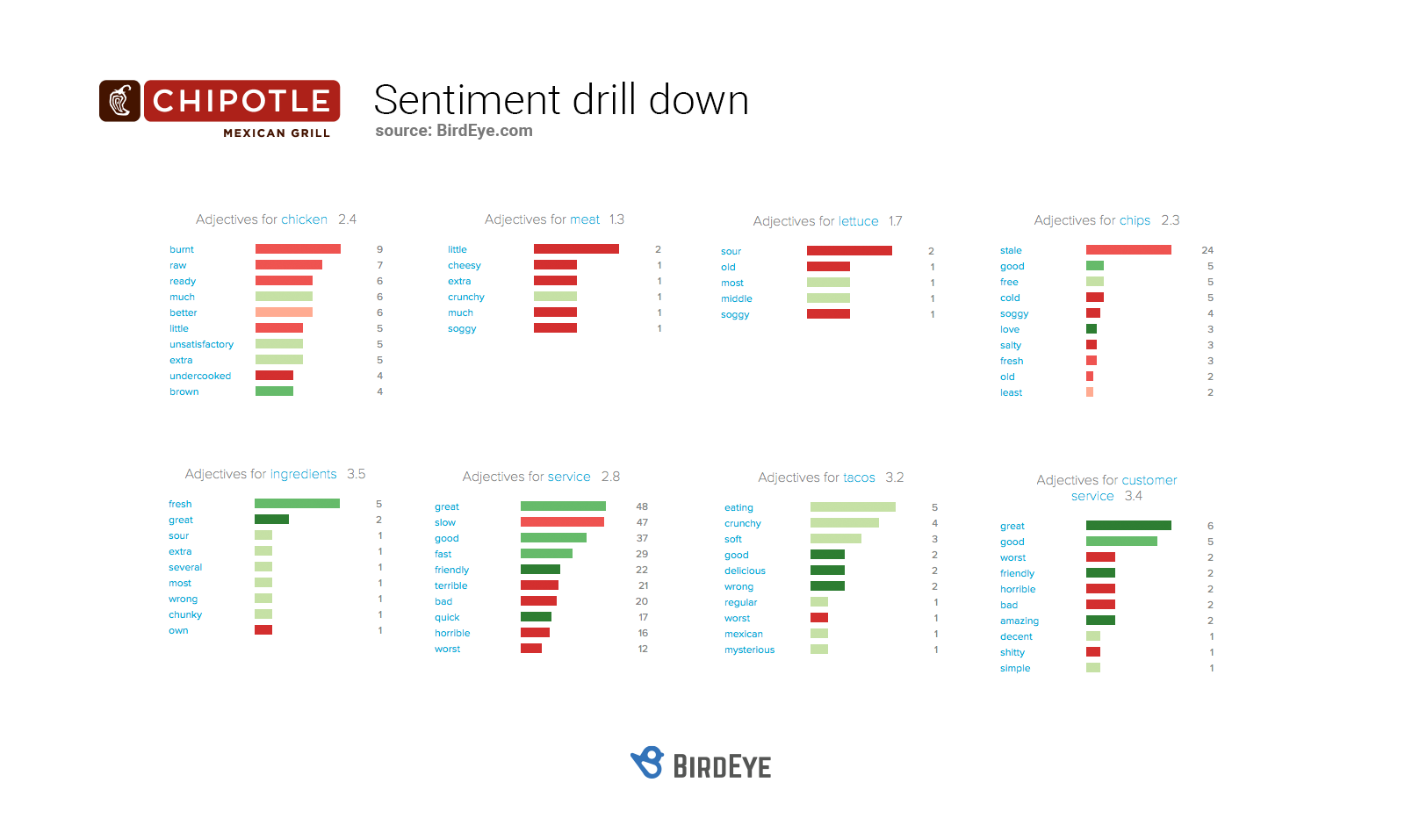 Chipotle’s increase in consumer sentiment is definitely encouraging, but to retain this happiness and achieve the stability of its competitors, the company still has much to prove. Unless Chipotle has plans of installing drive-thru, it seems both their chicken and service strategy should be simmered more cautiously.

Don't miss out on the latest from Birdeye.
Get our newsletter.